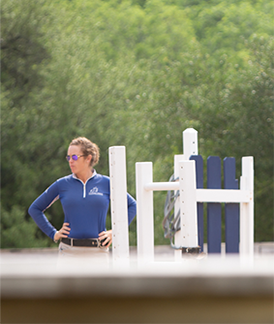 Laura began riding at age 5 and her passion for horses has only increased since. She started showing on the national “A” circuit when she was 7, and she has since competed in and won at many of the premier horse shows in North America, including Indio, Ocala, Spruce Meadows, Culpepper, the Olympic Park in Atlanta, and the Kentucky Horse Park. She has worked with several top trainers in Texas including Janet Christie, Tony Font, Christian Rogge and Peter Pletcher. Laura has also been instructed by some of the nation’s top trainers, including the legendary George Morris, Michael Endicott, Anne Kursinski, Chris Kappler, Nona Garson, Bernie Traurig and Liz Denny.

Laura attended Cornell University in Ithaca, New York, majoring in Economics. Since graduating in 2006, Laura has started her own business, as well as, training in Texas and competing both in state and across the US.

On top of instructing and trainers some of the best riders and competitive show jumpers in Central Texas, Laura enjoys young horses and working with the Oakhaven breeding operation, starting their youngsters undersaddle and taking them all the way into the show arena.